Weddings
The Venue Church Hall Bridal Suites Bar Boma/braai Photo Shoots Catering Rules Wedding Packages Additional info
Functions & Conferences
Function Function Hall Restaurant Braai/Boma Function Packages Additional info
Accommodation
Accommodation Standard Cottages Deluxe Cottages Self-catering Cottages Catering/Dining Additional Info & Rules
Gallery
General Images Weddings Functions
Rules and Regulations
Bookings/Pricing/Payment
Downloads - Brochures & Map
Contact
A church with high pitched roof and bell tower is built in the traditional old world style. The white edifice has traditional corrugated green roof cladding protecting Gothic pitched stained glass windows.  The heavy doors of 1980 era Oregon sourced from salvaged wood of a cottage on the Farm Durleigh, close to the traditionally British built “Nottingham Road Hotel” completed in 1857. The door wood is of the same period as the cottage.  The church boasts pews, salvaged from a collapsed church on the Wharf in Durban dating back to 1906-7.  These pews were exposed to the elements for about 7 years before being hauled to Tiegerpoort to be restored and placed in their current location.  Flooring is parquet from an old hotel in the then Jacob Mare street close to the Pretoria Station and dates from 1910.

The interior is unique, with the prospective bride having to navigate her way to the “moment of destiny” lectern made from Manzonia wood.  Décor originates from many parts of the world with candlesticks and crosses dating from 1860 and transported home from Napoli, where grandmother Truus Maranta’s ashes lie. These treasures were detected by snooper extrodianare Kinna in the backstreets of Naples. They are from an old church in Rome that was demolished to make way for progress. Icons from are small replicas from Monasteries in Bulgaria, and other items are from Belgrade and Syracuse in Sicily.

The facing wall for the bride and congregation boasts a magnificent interpretation of a Michelangelo Sistine Chapel work where God gives life to Adam.  This work is family done by Frankie Pretorius, husband of daughter Sandra having the sense to marry art into the family.

The atmosphere inside reminds of the serenity of the Sacre Cour and Notre Dame but on a smaller scale.  It provides the prospective couple with true surrounds to fulfil the commitments that will be made at the “altar”.   The Church is available for baptisms, services and funerals, and although with European in design is not religion bound. 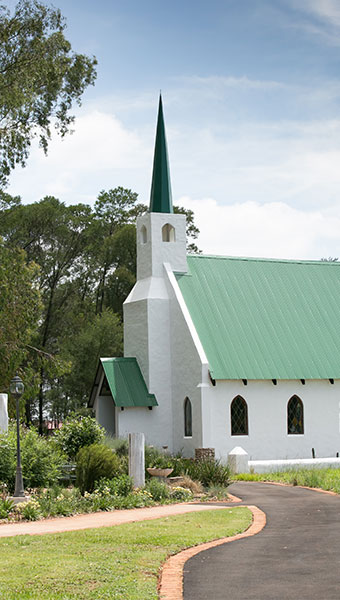